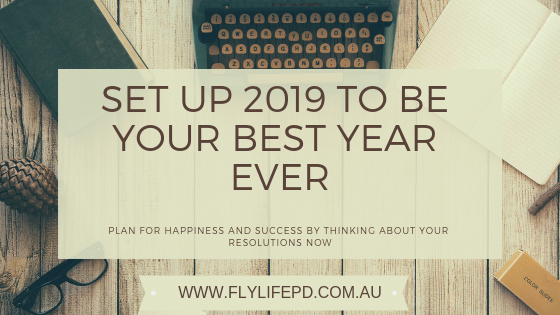 There’s something at this time of year I get even more excited about than Christmas. Don’t get me wrong – Christmas is great. I love the special time with family, the music, the food and drink, the games… and of course I love tracking Santa so I know when it’s time to go to bed.

But there’s something else that I get really excited about, but I never tell anyone. It’s the approaching new year. A fresh start! The opportunity for new goals and resolutions! A brand spankin’ new diary!!! Squeeeeaaaal!

I really do believe that you can start a new goal or a new resolution any old time. But at the start of a New Year is obviously the ultimate starting point.

This gets a little tricky in one way. Here in Australia we are still often in holiday mode right throughout January. Even if we’re back at work, the long summer days and hot weekends tend to mean more socialising and relaxing than normal. Which in turn can be detrimental to your goals… unless of course your goal is to socialise and relax more.

So the way I handle this is to treat all of January as my starting point. I work on my new goals with the plan to have them firmly in place by the end of the month.

Make the whole month the starting point, not just Jan 1.

For several years I tried to quit smoking. I tried at all different times of the year, but it was always a New Years Resolution. It was eight years ago that my resolution changed slightly. Instead of “Quit Smoking on January 1”, my resolution became “Be a healthy non-smoker by the end of January”.

I was still on holidays from work for that first week of January, so trying to completely stop smoking during that time would be a disaster. Like it had been every other year! But every other year when I failed on day two and had a cigarette, I just accepted that I’d failed my resolution again, and went on smoking.

This time though, things were different. During that first week of January I would think about quitting every time I lit up. I would try different techniques like delay and distraction for as long as possible. But when I eventually caved and lit the cigarette, rather than calling myself a failure, I acknowledged that I was making progress and there was still time to quit before the end of the month.

The last time I smoked a cigarette was 9 January 2011. Almost 8 years ago. I was successful that time for a number of reasons, which I’ll write about in another post, but one important reason was that I’d given myself some room to move. Maybe that would work for your resolutions, and maybe not. But it’s something to consider!

All I know, is that year I changed how I approached my New Year’s Resolutions, and that was the beginning of a totally new and happier life.

Anyway, back to my geeky excitement over the prospect of setting resolutions…

New Year’s Resolutions are too important just to make on a drunken whim on New Year’s Eve.

Start thinking now about how you want next year to look. More than that, how do you want it to FEEL?

Imagine this: It’s this time next year. You bump into an old friend who asks how your year has been. Your response is: “2019 was my best year EVER! Nothing could have been better!” Now pick apart what things might have happened during the year that could lead to that statement.

You might have just identified some goals to work toward!

There’s no need to sit and do a whole planning session right now. I’m sure there’s a million other things you need to get done before the fat man in red turns up. But I think it’s good to at least have this stuff swirling around in your mind so that when you do sit down to do some serious planning, you’re already primed.

Looking back on this year.

I think it’s always important when looking forward to your new goals, to also reflect on the past. It’s good to recognise what went really well, because this encourages us to keep going. Acknowledging what the challenges were helps us to plan for similar situations in the future.

These questions might also feed into how you setup your resolutions for the New Year. We want more of the good stuff and less of the crappy stuff!

Set aside a planning date.

Those days between Christmas and New Year are a beautiful time to set aside some time to sit and work through all of this in detail. You are setting your year up for happiness and success, so it’s worth putting a little bit of time and effort into.

For me, I’ll be trying to put aside a couple of hours at least. The house will need to be quiet. I will need a glass of wine and a clear desk. I’ll reflect on 2018, and plan for 2019. Perhaps I’ll consider the different domains of my life and have resolutions for each one. Maybe I’ll think about doing my own Happiness Project (which I’m currently reading). Or maybe I’ll have an overarching theme for the year that I’ll break down into goals.

Ohhhhh the possibilities. I can’t wait to let my mind explode with ideas, visions, goals, and plans.

And perhaps in another 8 years’ time, just like my quit-smoking achievement, I’ll be able to identify this as another significant turning point in my life.

Will you join me in setting up 2019 to be your best year ever? Share your thoughts in the comments!

3 Replies to “Start planning now for your best year ever!”