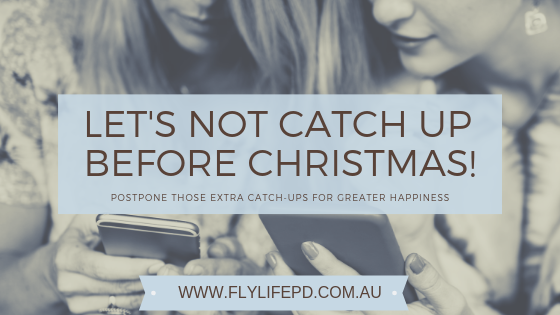 She’s making her list and checking it twice. Make that six times. Because even though she looked at it five other times, she was also juggling a screaming baby, trying to get the washing in, doing some overtime, and answering a bajillion questions from her husband. So she forgot what was on the list.

But now she’s checked it six times and rushed out to get some late-night groceries after the baby has gone to bed. Don’t worry, daddy is home with the baby! She’s madly trying to find everything in the store and wondering how far in advance she can buy Christmas food. Will it go bad? Will it get eaten before Christmas meaning not only that it goes BACK on the list, but so does a new pair of jeans in a bigger size?

She’s just remembered the Christmas party this weekend that she needs a Secret Santa gift for. Add that to the list. She’s wondering if she’s got the energy to get a few gifts from K-mart after this since it’s the only place she can think of that’s still open at this hour.

And then she turns the corner and sees a familiar face. It’s an old friend she hasn’t seen in a while. They have a great chat about how busy and stressed they both are. And then comes the dreaded phrase she knew was coming…

“Anyway, let’s catch up before Christmas!”

One of two scenarios often happen next:

Now step this way, and stay with me…

Imagine for a moment. You’re working at a retirement home and there’s an assembly for all the female residents. Tom Jones swaggers in and promises to take one lucky lady out for dinner. The first person to reach the stage wins.

Suddenly you have old ladies who haven’t walked in years leaping out of their wheelchairs. Others are whacking the competition with their walking frames, with a strength they certainly didn’t have when you were asking them to move from their bed to the chair.

Hips are breaking, wigs are flying. You’re trying to push three wheelchairs at a time so as not to show any favouritism. Martha reaches the stage and Harriet screams that Martha’s a no-good lesbian cheat. (Harriet’s not a nice person actually, and we’re secretly glad she didn’t win after this snarky comment).

The residents from the dementia ward next door have just arrived and most of them believe they’re under attack. And now you’ve been informed that you must assist everyone back to their rooms within the next ten minutes…

This scene is maybe a bit fun to watch,  but also panic-inducing and very alarming! That’s what life is like in the lead up to Christmas. (I promise I’ll work harder on my metaphors).

But seriously, life is crazy at this time of year. So unless there’s some urgent pressing reason you NEED to catch up with that person in the very near future, DON’T!

It doesn’t mean you don’t care about them or value them. It means that you value your sanity. And it also means that you value that person enough to want to save the catch-up until after Christmas, when things are quieter and calmer. When you can relax together and laugh about all the family madness you’ve both experienced over Christmas.

I’ve started politely declining invitations to catch up before Christmas. Most people understand when you say that you just can’t fit more in but would love to catch up after Christmas.

You know that quiet period when you feel a bit lost because all the excitement and madness is over? You’ve come out of your food coma and you’re ready to face the world again. The only thing you really should be doing is that big decluttering project that you swore you’d do in your holidays… THIS IS THE PERFECT TIME to squeeze in those extra catch-ups!

So do whatever is right for you in the lead-up to Christmas. If catching up with friends is what gets you through the season, do it. But if it adds a layer of stress, just lovingly say no. Arrange a later session instead. Start the new year with some fun social engagements to look forward to.

How do you feel about pre-Christmas catch-ups? Love them? Hate them? Think I’m just a grumpy loner who doesn’t get it? Let me know in the comments!

5 Replies to “Let’s NOT catch up before Christmas!”