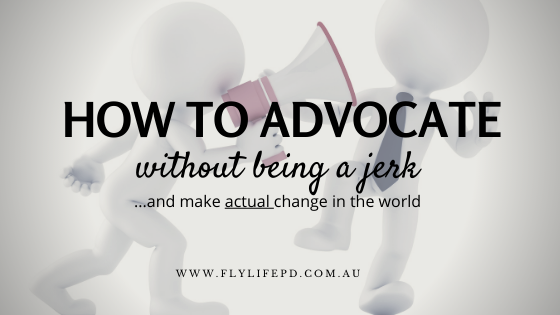 I’ve been thinking a lot lately about how you can make a big difference for something you believe in without being a jerk.  I like to think that I’m the sort of person who really stands up for what I believe in. But when the big issues come up in the media (and mostly social media), I find myself staying silent. Not because I don’t care, but because I care too much to risk stuffing it up.

I don’t wanna be that person. So I consider the alternative views and do my research, but then things get so complicated, and I realise, this is not a message that fits into a meme, or a short angry Facebook post. And to try and make it fit just makes me look like the ignorant jerk I was trying not to be. So instead, I stay silent.

And then I find myself wondering if my silence is weakness. If I’m truly standing up for what I believe in if I don’t have the tendency to try and persuade others to see the same views. So I decided to ask a friend, who I consider to be the most gentle and effective advocate of important causes.

I met David Addison through a previous job. I didn’t know a lot about him, except that everyone liked and respected him. Over time, I overheard snippets of conversations and realised that he would he would probably despise me if he knew me.

This is a guy who only puts his wheelie bin out twice a year because he simply has no waste – meanwhile I’m bringing my sandwiches to work in cling wrap and throwing the whole lot in the bin when I get a craving for a kebab instead. (Please note, I don’t do this anymore… mainly because I don’t work near that amazing kebab shop anymore)

But the proximity of our working space meant that I got to hear more about David’s views over time, and I was surprised to discover that instead of continuing to feel disgusted in myself or to think that he was just some higher being, I actually wanted to understand more and change some of my own behaviours.

And the interesting thing was, I didn’t hear more about his views because he was pushing them on anyone; I heard about them because people would ask him questions and he would answer openly. He would just speak about things in his own life as if they were totally normal, and while he didn’t pressure anyone else to do the same thing, he gave enough positive information that they wanted to. He’s selective about the information he shares on social media too, so that it is impactful but factual.

When I asked him how he does it, he gave me the following points.

How to advocate for your cause without being a jerk

1. Stop and think why someone said or did something before reacting – everyone has a story

2. Reflect on your own mistakes before judging someone for theirs

3. Give people the benefit of the doubt and focus on behaviours rather than assuming their motives – but always stand up for what you believe

4. Play the long game – every interaction you have with someone will shape your next interaction with them

5. Try to think about the pressure others might be under when they act badly – not to excuse it but to understand it

6. It takes a long time to build trust but 5 seconds to lose it

8. Listen and observe more than you talk

9. Forgive – others and yourself

I love all of these points, but number 4 and number 8 really resonated with me, particularly when it comes it making change in a thoughtful and powerful way.

Stop being a jerk

Sitting behind your computer screen and sharing post after post of angry or hateful material just to make your point is not working. The people who you most want to understand are instead switching off to you. You’re only gathering more angry and hateful people on your side.

And you can kid yourself by saying you’re not being hateful, but when you’re harshly judging those who disagree with you instead of trying to understand why they disagree, you’re just generating anger. You’re saying you are right and they are wrong. And maybe they are wrong, but you aren’t going to help educate people by getting them offside.

So here are my tips on how to be more like David and make an actual difference in the world:

What do you think?

I know there will be plenty of people who disagree with me and feel that having a loud voice on important issues is critical to making change. Please get in touch and tell me what you think. I want to understand your views on this too. I think it’s a really interesting thing to think about. How do you make a difference in the world?

You’ve been officially “an adult” for a few years now. Your friends are starting to settle down in serious relationships and some are even having babies. You have this ideal picture that you’ll be a mum well before 30.

So when he comes along and asks you out, of course you agree. He’s so masculine and so into you! Something about him makes you feel like he will protect you and you find him kind of exciting.

He’s so into you that he shares some of his vulnerability with you. His troubled childhood, his damaged heart. By this stage you’re pretty into him too, and your own heart aches for his painful history. You silently vow to protect him from ever feeling that pain again. You will love him and make sure you don’t hurt him.

So when he starts getting jealous about the time you spend with your family and your friends, initially you stand up to him and tell him he’s being unreasonable. He loses his temper and things get pretty scary. He points out how you’re just like all the others who have let him down. For a brief moment you’re stunned by how crazy he’s being. But eventually he turns on the tears or the remorse, and you realise that he’s not crazy, he’s just damaged. You decide you’ll be more sensitive in the future. So you limit the time you spend with your family or friends. Or you at least limit how much you tell him.

Some of your loved ones start expressing their concern. They’ve seen some behaviour or had some conversations that have raised alarm bells. They warn you gently and you brush it off. They don’t understand the complexity. And then they warn you more vocally and it actually kind of pisses you off. Things are good right now. Sure, it got terrifying a few days ago, but he’s sorry and now things are good, so don’t mess with it! You’re sure they’re totally overreacting – you are not one of those poor suckers in an abusive relationship. Are you…? Don’t be ridiculous.

And then it starts again. He’s angry at you. He needs to make you understand that it’s you who has the problem. Just like all the others! “You think you’re something special!” he belittles you. Despite his otherwise quiet nature, he’s really a very competent communicator when he needs to overpower you.

In a struggle to retain some of your self-worth, you might tell him what other people say about him. After all, in this moment, you entirely agree with them. You tell him that you should have listened to your mother. She was right – he is an abusive no-hoper who isn’t worth a minute more of your time.

And then he really loses it. Because not only have you enraged him with someone else’s criticism, you’ve proven his point. All those other people you love cannot be trusted. They’re all trying to turn you against him. And not only that, you’ve now hinted at the possibility that you may not stick around. So now, out come the big guns. Maybe literally.

Things calm down again, either because he’s sorry or because you’re afraid. Now that you’ve shared that other person’s judgment, you really need to be careful. His hatred for them has escalated and you don’t want him to be reminded of what they said, so you might distance yourself a little bit further.

Maybe you try leaving. But his anger or his sadness makes you return. He’s really very good at making you believe that it’s all in your head and you’re overreacting. He’s good at making you think it’s going to be different in the future.

And the cycle continues…

It’s not too late

By the time I was around 26 I had decided that having children was no longer an option. But neither was leaving. After 8 years of trying to learn how to make this the relationship I wanted, I realised it was never going to be that. But I also believed (after having a loaded gun aimed at me) that he wasn’t going to let me leave alive. So I grimly accepted that this was my life now and I just had to learn how to manage it in a way that would keep me safe.

From then on, I tried to stay out of his way and kept my head down when things got nasty.

I decided that if I was going to live this very lonely life, I was going to have to learn to love myself. Which was pretty hard, considering by this stage I believed I was worthless. I was lucky that there were quite a few people still in my life who believed in me and never wavered in their support of me (spoiler alert: I actually ended up marrying one of them). So I studied, and I did a lot of self-reflection, and I tried to improve myself – not for anyone else but for me.

Eventually, three years after my decision to accept that I was going to stay forever, I did make the decision to leave. Partly out of courage and conviction that there was a better life out there for me; and partly because I didn’t care anymore if I didn’t make it out alive – all I knew was that I couldn’t keep living this way.

I’m not going to lie. It was terrifying. For a long time. Still is, sometimes. But so was staying.

Your life plans may look a little different, but they’re different now anyway, right? This was not the life you planned, and deep down you know it.

Reach out to your family or friends. Reach out to local support services. Visit 1800RESPECT.org.au or phone 1800 737 732 for 24-hour confidential information, counselling, and support. Call 000 if you are in danger.

I am now happily married in a respectful and loving relationship. We disagree sometimes. We irritate each other plenty. Sometimes we fight. But it’s never nasty, it’s never disrespectful, and it’s never about power. We have a beautiful little boy and good jobs. I offer personal development coaching because I have seen how learning to love and respect myself could lead to such massive change. I want to help other people live the life they want.

Sometimes I still wonder if it was all in my head like he said… but some of those memories I couldn’t make up if I tried. You know as well as I do that it’s not you. Please seek help.